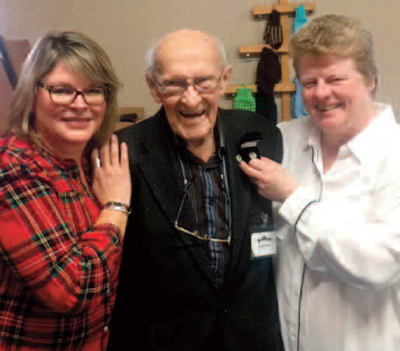 After 30 years as a volunteer driver with the Olde Forge, Doug Drew, the man with the beautiful music playing in his car, has decided to retire! The actual number of volunteer hours Doug has given over the past 30 years is hard to calculate (his time with us pre-dates our database) but from the information we have, the number is well over 10,000 hours!

Doug began volunteering with the Olde Forge shortly after retiring from MET Life Insurance in 1988. He had reached out to Ottawa Volunteer Service Bureau to inquire about volunteer opportunities in his community, and was given a list of four organizations to contact. The very next day Doug received a call from the Olde Forge with an opportunity to become a volunteer driver, and the rest, as we say, is history!

Doug's first drive with the Olde Forge was for a gentleman who had not been out of his apartment in over 6 months. After this first experience, it was clear to Doug that being a volunteer driver not only filled a critical niche in Seniors Transportation but, the drives made a real difference to the lives of so many people in his community. When asked how driving has changed over the past 30 years, Doug agrees that the city has gotten a lot bigger, the traffic a lot heavier, but the clients he has served have always remained the same. For Doug, the people he met on his drives were always the best part of the job, and it is what he will miss the most.

So, what are Doug's plans now that he is volunteer driver-retired? Well, as some of you know, Doug has been singing bass with the Capital City Chorus for over 47 years! Therefore, it will come as no surprise that his first order of business will be to jet off to Nashville with his Chorus to participate in a Senior Chorus Convention and Competition! After that, well, Doug has hinted that he might start sharing his passion for baking with the clients (and hopefully staff) at the Olde Forge. Word on the street is that he makes a mean Tomato Soup cake!

Congratulations, Doug, on a 30-year retirement well spent! It has been nothing less than an honour to work with you, and we feel so blessed to have had you as an integral part of our team for the past 30 years!