History of the Olde Forge Building

The Beginning - A Blacksmith's Shop 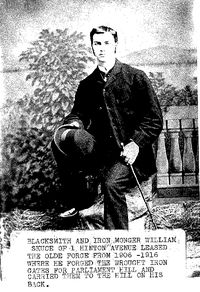 For over 175 years the Olde Forge has been an important part of our community and over the years has become a focal point for help and caring in the neighbourhood.

The building began its life as a blacksmith’s shop in 1832 where the owner, George Winthrop, made horseshoes, ploughs and other equipment for the booming timber trade.

George and his wife Jane came from England in 1828 with three of George’s brothers. initially living in Montreal for 2 years. Their grandson, Robert, recalls his grandfather told of how they came up by row boat from Montreal and landed in what was then Bytown. They landed at what is likely Richmond Landing below the Chauriere.

In 1831 George and Jane settled in the township of Nepean on a 4 ½ acre piece of property at the juncture of Richmond Rd. and March Rd. (later to become Carling Avenue). The property would remain in the family for 133 years and would become a community landmark. In 1851, the census records them being the parents of two children, Robert and Margaret.

George did a busy trade as a blacksmith, catering to the influx of settlers. His shop was well situated between the booming Bytown and the outskirts of town. He was called upon to do all types of work mending crude machines, ploughs and keeping horses properly footed. George died March 2, 1868 at the age of 77 and is buried in Christ Church cemetery in Bell’s Corners.

George’s son, Robert, who had been born in the log house about 1842, continued the business which expanded to keep pace with the continued influx of settlers who established large farms along Richmond Road.

In 1870, a new forge was constructed with quite a few barns in the back. Shortly after their completion, these buildings were nearly lost, in the terrible fire of 1870. The summer had been very hot and dry, and on August 17th, someone in Bells Corners decided to burn some brush. The fire was soon out of control, with high winds creating days of terror for the residents of Nepean, March and Goulbourn. Huge fireballs from the raging flames were thrown into the air and carried long distances by the high winds of that night. Some of them fell on the Forge’s new building and had to be extinguished by family and neighbours. Settlers fled for their lives leaving all they had worked for, their homes and businesses, their animals. Many were forced to find refuge in creeks and Bells Corners was destroyed except for a couple of houses left standing.

The Gates to Parliament Hill

It is rumored, that the gates to parliament hill were constructed at Winthrop’s forge and carried in pieces by horse and wagon to the site to be installed somewhere around 1876. In addition to being a forge, Robert also operated the forge as an agent for farm implements. In the 1890’s the forge was also the local post office.

The End of an Era - From Forge to Tearoom 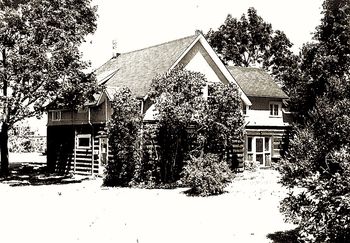 About 1909, Robert gave up the business and rented out the forge for a time, but continued to live in the home. In 1929, he died in the home at the age of 87, and is buried in the family plot in Bells Corners. It is noted that he was the father of 7 surviving children.

One of Robert’s sons, also named Robert continued to live in the home. He married Emma Knott who died in 1959. Not only was the need for blacksmiths dying, but the country was going through the great depression and businesses needed to be adaptable to continue to survive. In 1932 Robert renovated the home and much of the original building disappeared, although he did re-use the original timbers. He opened up the Olde Forge Tearoom, which quickly became a gathering place for church and women’s groups, dinner parties and for accommodating paying guests. Mrs. Winthrop was an excellent cook and the Winthrops were very hospitable hosts. Some of the youth of the area would have sleigh ride parties followed by dancing and bean suppers at the Olde Forge. The large fireplace in what is now our meeting room, made it a cozy gathering place for the community.

During the years of World War II, the Winthrops operated a taxi service and a Texaco gas station.

The west end of Ottawa continued to grow and the rising traffic on Richmond and Carling spelt the end of the Forge as a business. Space was needed to widen the streets, and in 1958, the City of Ottawa expropriated the Winthrop property, along with other properties in the area. The streets were actually widened in 1960. The City began using the Winthrop home as a tourist reception center, which was opened by Mayor Charlotte Whitton in the presence of a notable gathering. She even wielded a broad axe to cut down a tree there. Robert Winthrop continued to live in the home, leasing it back from the city and the tourist center operated out of the living room. After Robert moved out, date unknown, a local letter carried rented the living portion of the Olde Forge. Robert passed away in 1966 at the age of 82 at the home of another local pioneering family, David Richardson.

Other possible uses for the Olde Forge were sought. Mayor Charlotte Whitton wanted a museum on the site, while the National Capital Commission suggested that the property might be suitably developed as a west end community centre with a library and health centre, among other things. After eight years as a tourist information centre, the Pinecrest Queensway Citizens Committee established the Olde Forge as a community resource centre in 1964.

In 1987 the Olde Forge Community Resource Centre inaugurated its home support program for senior citizens helping local seniors remain independent in their homes, a function that we continue to perform today.

On February 16, 1998, the Olde Forge was officially declared a heritage site and a plaque was unveiled by Mayor Jim Watson.

Today, the Olde Forge continues to thrive as a community resource centre and a provider of community support services to seniors and adults with physical disabilities living in the west end of Ottawa.

The community has a very strong connection to the log building which has sat at the busy intersection for all of their lives and that of their parents, grandparents and great-grandparents. There is not a week that goes by that a visitor doesn’t stop by, asking if they can see the building and we are always delighted to show it to them. Many people come here with their own stories and memories to share with us.

People are amazed by the size of the building once they come inside. Although it appears quite small when you drive by, we have a large meeting room, large kitchen, laundry room, 4 wheelchair-accessible washrooms, offices for 7 staff and a fully used basement.

Doing business in an old building, especially one with heritage status has its challenges, particularly during inclement weather. The heritage designation prevents changes to the appearance of the exterior. But the pay-off is worth it. We get to go to work each day in a charming building that is treasured by local residents.

We have a beautiful meeting room with the original and still working fireplace that enticed the youth of yesteryear after their sleighing parties. The meeting room is the site of community group meetings and family gatherings. Hundreds of people visit the building every month, for one reason or another and it continues its history of being a busy hub in its community.

The building is situated on a beautiful piece of property which houses the Britannia Community Garden. The garden was started in 1991 by a small group of volunteers and was the first community garden in Ottawa. The majority of the plants have been donations, most of which have come from local gardeners. Each year, a plant sale is held to pay for further garden improvements. The garden continues to be maintained by volunteers with the support and cooperation of the City of Ottawa, which mows the grass and since 1991, has planted almost 100 young trees. In 1995, the park was officially renamed the Jill Brown Park, after the late former city councillor for our ward.

We invite you to come in and see the building.